I spend a lot of time at my PC so I’ve put a lot of though into the parts that make the experience a pleasent one. I have a modest PC I build back in 2015 when I was still in high school. It’s served me quite well over the years. Here are the major components that make up my system. I’m also planning on updating this post whenever I add new equipment to my desk setup.

I’m a self proclaimed keyboard enthusiast. I first discovered the benefits of a mechanical keyboard with my purchase of a Corsair K70. This was a modest entry to the mechanical keyboard world with Cherry MX Brown switches. Part of my journey to using mechanical keyboards has involved a detour into learning the Dvorak key layout. Dvorak positions the most commonly used keys on the home row, and places the less common keys in harder to reach areas of the keyboard. This means that it’s easier on average to type words as the more common letters are easier to access. This decision has not necessarily made my typing faster, but it dose reduce the usage of some of the more awkward to reach button presses as often.

My current keyboard setup at the office is an ErgoDox EZ. This is a split keyboard with Cherry MX brown switches. I chose the key caps with no labels on them since they wouldn’t line up anyways using the Dvorak layout. One of the best things about this keyboard is that it has ortho-linear keys. This means that the keys are not staggered and are lined straight up and down for each finger. It is shifted slightly to match the length of each individual finger. I cannot stand typing on regular keyboards anymore because of the staggered keys.

One thing that did take a while to get used to was the number of keys on the keyboard. Coming from a 10 key keyboard which has approximately 104 keys whereas the ErgoDox EZ only has 76 keys available. The ErgoDox EZ allows keys to be put on different layers that are accessible by pressing a key combination to make the hidden keys available. 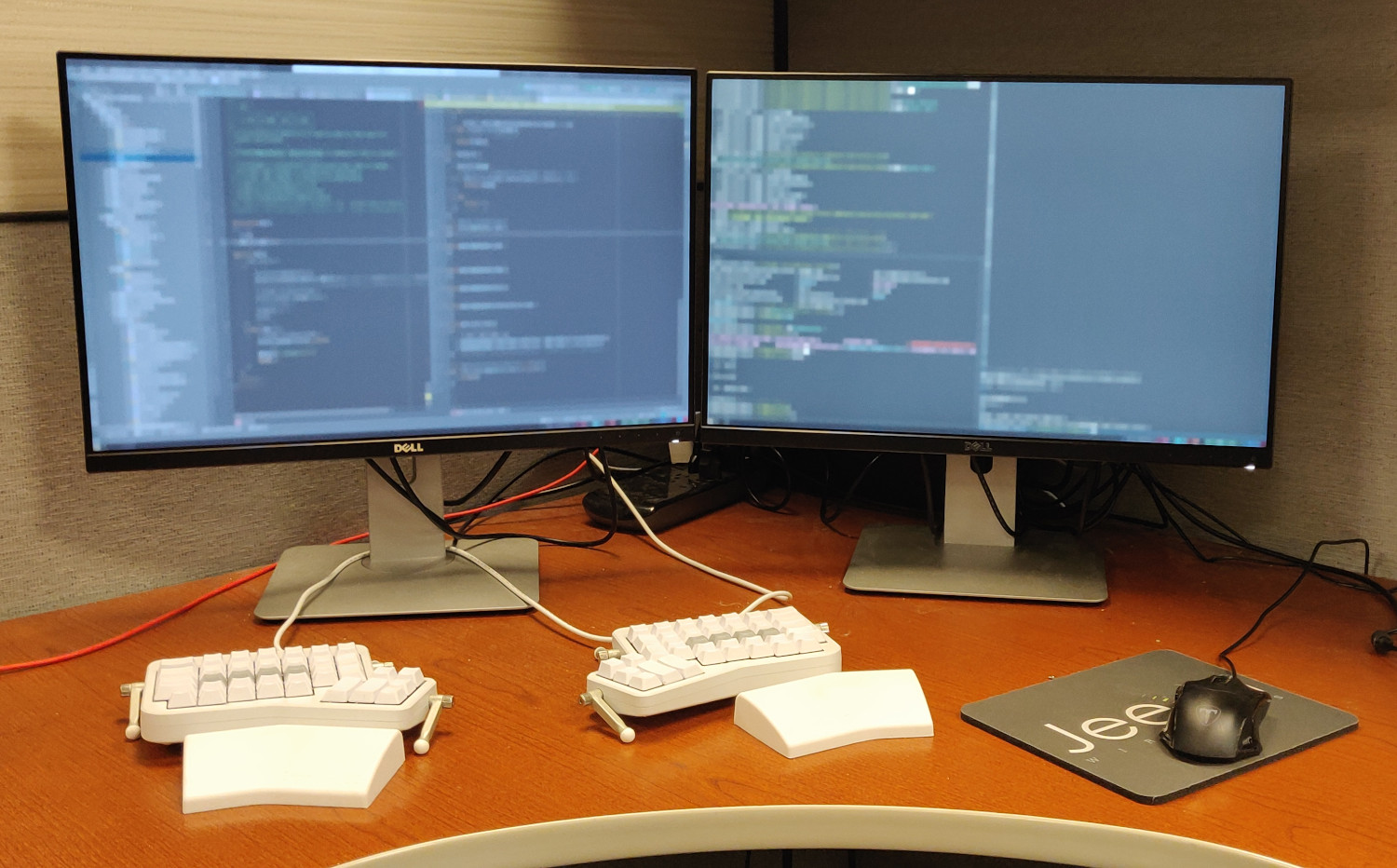 I decided to “make” my own desk for home. It’s really not that much work and I’m really happy with the outcome. I was going for the simple look so it’s simply a piece of Acacia wood butcher block from Home Depot. I also wanted to try out the standing desk so I got adjustable legs which allow the desk to be raised to a standing position and lowered to a sitting position. The VIVO desk stand has a manual adjustment which reduced the prices by a couple hundred dollars over the electric motor version.

I splurged and bought two Dell 27 in 2560x1440 monitors. I got lucky and there was a sale where they were each $100 dollars off their regular price on Amazon. There is nothing better than haveing two identical monitors for the screen realistate it provides. The color profile and IPS viewing angles on these monitors is amazing. They are slightly lack-luster for gaming since they have a slow refresh rate of 60 Hz. This is not a problem for me though since I don’t play any competitive games.

I have a Plex Media Server setup at home and like to rip media from DVD and Blue-Ray discs to be viewed from my home server. MakeMKV is an excellent program to rip media from both DVD and Blu-Ray discs. Ripping Blu-Ray discs is only available if the software is purchased or used in a temporary BETA mode. The trick is that a BETA key is always provided in the MakeMKV fourm. I believe this is a way to get around licensing issues that come with providing a free Blu-Ray decoder. MakeMKV rips the DVD in a lossless format that can then be trans-coded into a more efficient into a more efficient codec like HVEC x265 using HandBrake.

Getting started with STM32 development using CubeMX and gcc